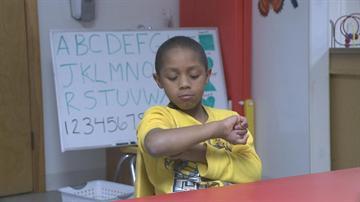 ELKHART, Ind. – When Nicholas came home from school with bruises up and down his arms, his mother was shocked, but even more confused.

“I never expected this to happen at school,” Onniesha Harris said. Her son, a kindergartner at May Feeser Elementary told her without thought or hesitation, that the bruises came from his teacher.

“It’s not okay for them to leave bruises or marks on any child,” Harris said.

The principal had called Harris at work Tuesday afte noon; she said she knew Nicholas had gotten in trouble but no one ever told her things got physical.

Harris said, “I didn’t know they had left bruises on his arms.”

Nicholas said he screamed be his teachers put her hands on him, “She grabbed me tight,” he said.

When asked if the teacher hurt him, Nicholas said, “Yeah, that’s how I got these bruises.”

Tuesday evening Harris tried to call the school but the office was already closed, so photographed the bruises and called 9-1-1 to report the alleged crime and file charges of battery against the teacher.

Harris said she’s not exactly sure what happened, “The school can’t keep their story straight,” she said.

On Wednesday she spoke to the principal, she said she was told a few different things on how her son was injured, but no one ever denied the teacher was responsible for the bruises.

While the school’s version of events has changed, Harris said her 5-year-old son’s story has been consistent.

Nicholas said he asked to go to the bathroom, his teacher said no, but he tried to leave the class anyway. That’s when he said his kindergarten teachers grabbed both of his arms and squeezed just above his elbows.

“Why did they use such excessive force that he had marks on his arm?”

Harris said the bruises are proof enough, whatever the teacher did; she said it was harmful and cruel.

The Elkhart Community School Corporation would not comment on this incident, “In fact, it’s not appropriate for me to talk about any investigation related to an employee.” Doug Thorne said.

As Director of student and employee relations, Thorne said the school corporation talks all allegations seriously and it is investigating this case.

Thorne would not comment if the teacher has been at school since the incident with Nicholas or not, but if accusations of misconduct are found to be true, he said the teacher could be terminated.

Thorne said corporal punishment, like spanking is not allowed at Elkhart Community Schools; however, physical contact like grabbing a student can and does happen, especially with younger children.

“Not dissimilar to what a parent might do if a child is in a temper tantrum or something of that nature, we might hold onto that child,” Thorne said.

Harris said she can understand that, it’s not an excuse for what happened. As a parent, Harris said she has never grabbed her child so hard that his skin bruised.

Nicholas has not been back to Feeser Elementary, not because he didn’t want to go back but because he’s been suspended.

Harris said she has a meeting with the teacher and administrators on Friday, but doesn’t think her son will ever return to the school.

Detectives will be talking to witnesses and conducting interviews to determine why things got physical and how the teacher put her hands on the child.