Mom unhappy with school's response to threat against her son 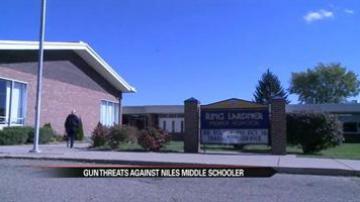 NILES, Mich. -- A Niles parent has been keeping her son home from school over the last few days because another student threatened him. She says she is scared for her son's safety.

"A gun threat to me is very serious," said Kellie Bella.

Bella is upset about the way school officials have handled a threat of violence she says was made against her son at Ring Lardner Middle School.

"My son was threatened at school that a boy was going to bring a gun to school and shoot him," said Bella.

The incident happened on Tuesday.

Bella says the school never even informed her of what happened

"Basically they were just going to do a no contact order within the school so that my son didn't talk to this other student and he didn't talk to him," said Bella.

"I was concerned that this child could still bring a gun to school and shoot him or other students," said Bella.

Ring Lardner Middle School Principal Doug Langmeyer says they would never put their students in that kind of danger.

"Maintaining the safety and security of our student body is our most important responsibility," said Langmeyer.

He says the school is taking care of the situation.

"When we do have behaviors that go against our code of conduct there's a process in place to ensure that we're being fair to all parties involved," said Langmeyer.

For Bella and her son, that's just not enough.

"This isn't something that can be pushed aside. It's a serious threat. Nobody knows if this kid is going to get a gun and bring it to school, maybe he doesn't have one at home, but I'm sure if he wants to hurt somebody bad enough, he'll find a way to get one," said Bella.

Niles Police say they conducted their own investigation and found the child who made the threats does not have access to guns at his home.