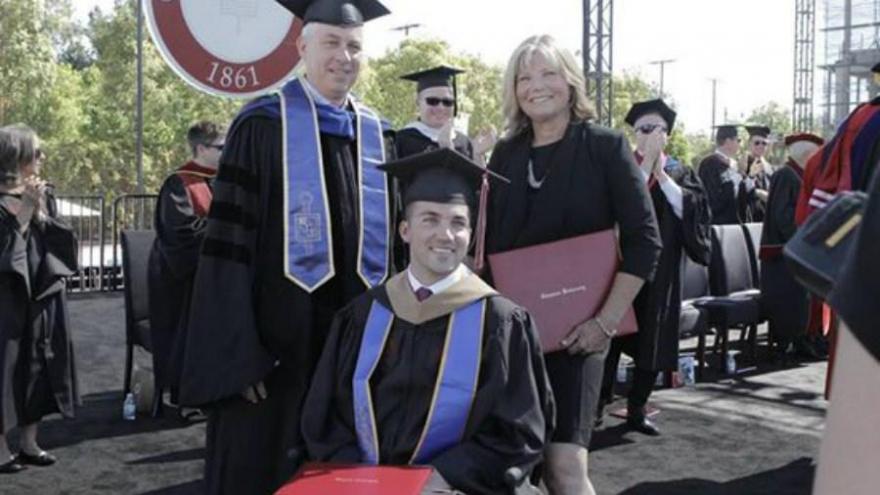 Orange County, CA -- An Orange County mother helped realize her son's goal of earning an MBA despite a debilitating accident that left him a quadriplegic. Over the weekend, they both earned degrees.

Judy O'Connor attended every class with 29-year-old Marty O'Connor, taking notes for him as he worked toward his master's of business administration degree at Chapman University.

Shortly after pushing Marty in his wheelchair across the stage, Judy was called out as a "special individual." The crowd cheered.

The announcer became choked up as she read about the decision by the faculty, administration and board of trustees to award the elder O'Connor an honorary degree.

"Mrs. Judith O'Connor has attended all the classes with her son Marty," the announcer said. "She has taken notes and worked with Marty throughout his academic career."

The degree was a surprise, according to the university, but the retired elementary school teacher managed the spotlight gracefully, video from the ceremony showed. Judy O'Connor smiled and posed for photos with her son, blowing a kiss toward the crowd.

Her son suggested his mother receive the degree, the announcer said.

"I was just so excited for her because she deserved it so much," Marty O'Connor said.

Marty, who grew up in Anaheim Hills, fell down a flight of stairs in 2012, two years after earning his undergrad degree from University of Colorado, according to Chapman University's blog.

His primary focus at first was physical therapy, five days per week. That helped him heal physically but he still felt lost mentally, he said. Graduate school became a goal.

Judy O'Connor was living in Florida and teaching at the time of the accident, but she came to Southern California to help her son.

O'Connor was awarded a $10,000 annual scholarship through Swim With Mike, an organization started to benefit USC All-American swimmer Mike Nyeholt, who was paralyzed in a motorcycle crash in 1981.

During his studies at Chapman, Marty used voice recognition software and other aids, but he couldn't take notes or hand-write test answers. That's where his mom came in.

"As a mom, you just want to help your kids get through things," Judy O'Connor told KTLA. "I always believed in him. I knew he could do it and I just wanted to have his back."

She loved the experience, she told a writer for Chapman's blog.