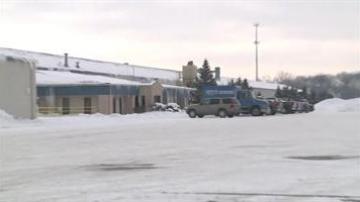 ELKHART, Ind. -- Monaco RV in Elkhart is closing up shop leaving nearly 200 people without jobs. It also shut down operations in Harrisburg, Oregon leaving 128 people out of work there.

Some stopped by the factory on Tuesday to pick up their tools.

Kyle Hannon with the Elkhart Chamber of Commerce says he didn't see this coming either.

"It's interesting because a lot of the RV companies are really doing very well right now so when one of them closes I kind of wonder what's going on there," said Hannon.

A Monaco worker who had been with the company for more than a decade said the company has been declining for years.

He said when he started working with Monaco ten years ago, he was making nearly $20 an hour. His paychecks have been cut nearly in half.

When it comes to production, he says the assembly line was barely making about one trailer a week.

Monaco has been plagued with problems for a while.

The company filed for bankruptcy in 2009, was bought by Navistar, then was sold to Allied Specialty Vehicles.

Last May the company closed its Wakarusa plant, leaving 500 people without jobs.

We tried contacting Allied, but no one returned our calls.