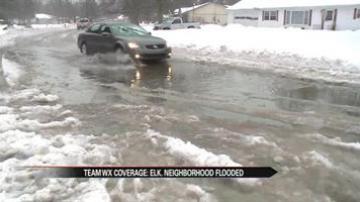 ELKHART, Ind. -- Even though it was known the rain was coming, some residents said counties and cities didn't do enough to prepare neighborhoods for flooding.

In Elkhart’s Pine Crest neighborhood it was like watching drivers back their cars out into a small river.

Residents said they might need to trade in their cars for boats.

Resident Susan Chilbert said she saw it coming but isn't happy with how it's coming along.

Chilberg thinks some flooding could have been avoided, had more plow trucks come through her neighborhood.

Even with an increased amount of snow, she feels like her neighborhood has been ignored.

Some neighbors took the do-it-yourself approach, trying to drain the water themselves.

“It’s the worst I’ve seen it. And I’ve lived here 17 years. Hopefully it will go down a little bit more. It should drain off hopefully,” Jim Hagen said.

But narrowing lanes and slippery slush have Chilberg feeling pessimistic, with her family’s safety at the front of her mind.

“If an emergency vehicle needs to get here, they’re going to have trouble,” said Chilberg.

Fortunately many neighbor’s homes are elevated from the streets. But some neighbors who didn’t want to talk on camera say their basements have flooded.