More questions than answers in slayings of Boston doctors 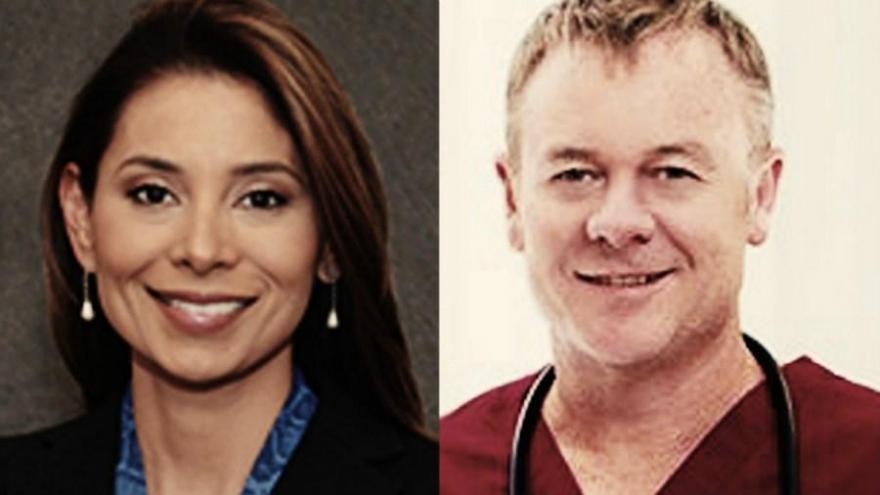 (CNN) -- Richard Field sent a friend a chilling text message, saying a gunman had entered his South Boston penthouse and asking that police be notified.

"A plea for help, if you will," Suffolk Chief Trial Counsel John Pappas said.

Later Friday night, police discovered the bodies of Field, 49, and his 38-year-old fiancée Lina Bolanos, both well-known anesthesiologists at Boston-area practices, at the luxury highrise where they lived.

A suspect in their deaths, Bampumim Teixeira, 30, was arraigned on two counts of murder in his hospital bed on Monday, tubes crisscrossing his body. He was shot numerous times Friday after officers responded to 911 calls about a person with a gun at a condo building on Dorchester Avenue in South Boston, police said.

In the days since the bodies were discovered, the case has raised more questions than answers.

Field and Bolanos had their hands bound and their throats slit, two unnamed officials told the Boston Globe. Blood was splattered on the walls of their apartment.

Photos of Field and Bolanos had been cut up, the officials told the newspaper. A message of retribution was scrawled on a wall, one official told the Globe.

Little is known about Teixeira at this time. He held a security job at the condo complex for a time before 2016, according to the Globe.

Officers who confronted the suspect in a dark hallway in the building believed he either pointed or fired a weapon at them, according to Suffolk County District Attorney Daniel Conley. They opened fire, wounding the suspect.

He was arrested after a "violent struggle," according to police.

Teixeira was charged with two counts of murder and his attorney entered a not guilty plea to both charges on his behalf. He's being held without bail.

A backpack full of jewelry

Pappas said Boston police received two 911 phone calls -- one from the front desk at the luxury Macallen Building in South Boston to report that it had received a concerned call from a friend of Field, and the other call from the friend himself. The friend allegedly received a text message from Field saying that he was in trouble and that there was a gunman in his apartment.

When police arrived, they entered the penthouse apartment. They encountered Teixeira and a gunfire erupted, with Teixeira getting hit in his left hand, abdomen and leg.

After Teixeira was detained, police found Field and Bolanos dead. They also found what could be a critical piece of evidence -- a black backpack in a "conspicuous" location, according to Pappas. The bag was full of jewelry, presumably belonging to Bolanos.

Conley told reporters that the black bag was not in Teixeira's hands when he was shot. The bag was found near the door. At least one knife was found at the scene.

During the hospital-room arraignment, Teixiera's eyes were closed for most of the hearing, though he was able to respond with one-word answers.

Field and Bolanos were well-regarded anesthesiologists. Field was instrumental in founding North Shore Pain Management, according to a statement from the staff there.

"He was a valued member of the medical community and a tremendous advocate for his patients," North Shore Pain Management said in a statement on its website. "His tragic and sudden passing leaves an inescapable void in all of us."

Bolanos was a pediatric anesthesiologist at Massachusetts Eye and Ear, according to the clinic's CEO, John Fernandez.

"Dr. Bolanos was an outstanding pediatric anesthesiologist and a wonderful colleague in the prime of both her career and life," he said in a statement. "We will do all we can to support their families and our staff members who are processing this senseless tragedy and grieving an enormous loss."

Photos on Field's Facebook page show the couple hiking in the mountains, fishing in Key West and wearing loud red and green outfits at a holiday party in December 2015.

Property records show that in 2013 Field paid $1.9 million for the two-bedroom, two-bath penthouse, which has a rooftop deck, according to the Boston Globe. The stylish brown condo building is known for its distinctive sloping look.

Josh Golden, the owner of Luxury Residential Group, says that his company regularly works with the Macallen Building to sell units and recently sold the penthouse across the hall from the couple's unit. He said the two were "very sweet and accommodating" during that process.

The building has high security, including security cameras in the lobby and a 24/7 concierge, Golden said. Additionally, access to the elevator for its penthouse level is regulated by a key fob, Golden said.

"You can't get up there without a key. The elevators wouldn't even open the door for you without a key," Macallen Building resident Jack Fu told CNN affiliate WCVB. "So there's no access unless someone lets you in."

There is currently no evidence to point at any connection or relationship between Teixeira and the doctors, Conley said. He added that they are looking in to any kind of employment Teixeira may have had in the area and how he was able to access the doctors' home.

Teixeira has two previous larceny convictions, according according to Suffolk County District Attorney's Office spokesman Jake Wark. In the summer of 2016, Teixeira passed a note demanding money at a bank.

The second, virtually identical incident, which remained unsolved until Teixeira volunteered the information to law enforcement after his 2016 arrest, took place in August 2014 at the same location. Teixeira pleaded guilty to both crimes and was sentenced to a term of 364 days, with nine months to serve and the balance suspended for a three-year probationary term, according to Wark. No weapon possession or injuries were reported as a part of either incident.

A motive is still under investigation, he said.

Teixeira will appear in court on June 8 for a probable cause hearing.

CNN's Amanda Watts and Joe Sutton contributed to this report.