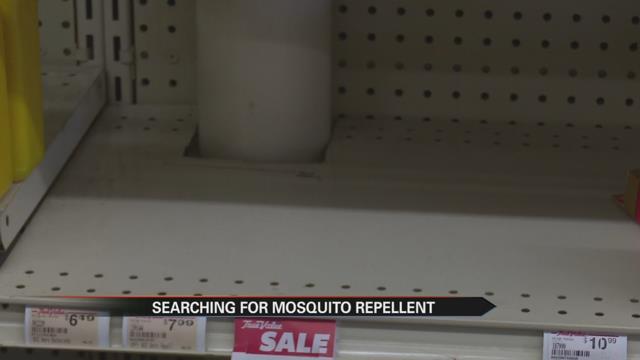 It's a record for Hill's True Value Hardware Store in South Bend.  In just three days, this location was out of mosquito repellent.

"I can't remember being any busier from mosquitoes," says general manager, Bryce Hill.

Everyone is complaining about it - there seems to be no bug spray left to be found.

There's not enough to go around.  And it's ruining some people's days.

It's Sharon Cooper's birthday today.  All she wanted to do, is celebrate with her family at Rum Village's Aerial Park. But because one of children didn't want to get bitten up, not everyone will be there.

"I would like my whole family to be here today, but they wont be, because of the mosquitoes," says Cooper.

Cooper's family is one of the many that tried unsuccessfully to get some bug spray from the stores. Rum Village has been providing what they can to families, but Cooper is determined to find her own, and soon.

"I think we're going to have to stockpile a little bit, but I have a feeling that's what a lot of people are doing right now," adds Cooper.

Stores like Hill's are preparing for just that.  Hill says he ordered a truckload, with at least as much as he sold last time.

His advice to shoppers: go with the bigger can.