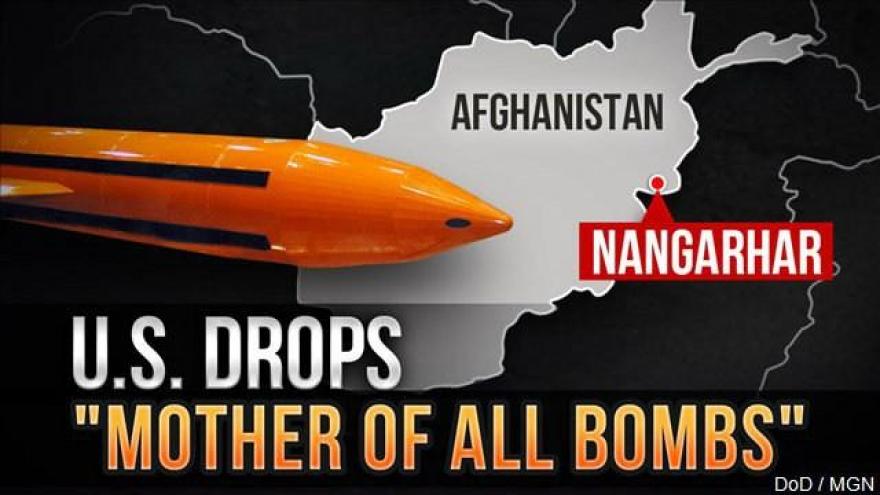 KABUL (CNN) -- At least 94 Islamic State fighters were killed when the US military dropped America's most powerful non-nuclear bomb on ISIS targets in Afghanistan, an Afghan official said Saturday.

"The number of Daesh fighters killed in the US bomb in Achin district jumped to 94, including four commanders," Nangarhar provincial spokesman Attaullah Khogiani told CNN, using an alternative name for ISIS.

The initial toll given by Afghan officials for Thursday's strike was 36. A statement released Friday through ISIS' media wing, Amaq News Agency, said none of the terror group's fighters were killed or injured.

The GBU-43/B Massive Ordnance Air Blast Bomb (MOAB), nicknamed the "mother of all bombs" for its extraordinary force, was dropped at 7:32 p.m. local time Thursday, according to four US military officials with direct knowledge of the mission.

The strike targeted a network of fortified underground tunnels that ISIS had been using to stage attacks on government forces in Nangarhar province, near the Pakistan border.

The blast destroyed three underground tunnels as well as weapons and ammunition, but no civilians were hurt, Afghan and US officials said.

The US military defended its decision when it was quizzed Friday on whether the 21,600-pound behemoth was necessary for that particular target.

The 30-foot-long, GPS-guided bomb is capable of destroying an area equivalent to nine city blocks.

"This was the right weapon against the right target," Gen. John Nicholson, commander for US forces in Afghanistan, said at a news conference.

"It was the right time to use it tactically against the right target on the battlefield."

The US military previously estimated ISIS had 600 to 800 active fighters in the area.

Afghan President Ashraf Ghani said he approved of the strike, and it was designed to support Afghan and US forces conducting clearance operations in the region.

But former President Hamid Karzai accused the United States of using Afghanistan as "a testing ground for new and dangerous weapons."

President Donald Trump said this week he would be sending his new national security adviser, Lt. Gen. HR McMaster, to Afghanistan "to find out how we can make progress alongside our Afghan partners and NATO allies."

White House officials won't detail precisely when that visit will take place but say it will come "soon."

One resident living around 2 kilometers (1.5 miles) from the blast told CNN he heard an "extremely loud boom that smashed the windows of our house."

"We were all scared, and my children and my wife were crying. We thought it had happened right in front of our house," he said.

"I have witnessed a countless number of explosions and bombings in the last 30 years of war in Afghanistan, but this one was more powerful than any other bomb as far as I remember."

Hamdullah Mohib, Afghanistan's ambassador to the United States, said the colossal MOAB was dropped after fighting had intensified over the last week. US and Afghan forces had been unable to advance because ISIS -- which has expanded into Afghanistan in recent years -- had mined the area with explosives.

Locals told CNN that more than 3,000 families had fled the district in the past year or so since the militant group established its presence.

One man, who did not want to give his name for fear of ISIS retaliation, said there were no civilians left in the area the group controlled.

The region butts up against the porous Pakistan border. The rocky landscape is dotted with caves and defensive tunnels, making it easy to hold and hard to attack, according to Nic Robertson, CNN's international diplomatic editor, who has reported from the Afghan mountains.