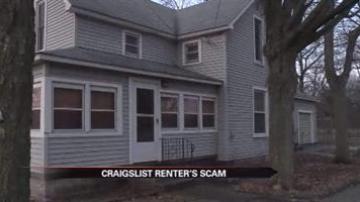 ELKHART, Ind. -- A local mother of four was scammed out of hundreds of dollars when she found a house on Craigslist and sent money to the man she thought was the owner. Only to find out he didn't really own the house.

"I found the house on Craigslist you know it was beautiful, I thought it was the perfect place for us - a place where my kids could be kids," said Heather Wright, mother of four.

Monday was supposed to be move-in day. The only problem is, Wright never received keys to the house.

"Sent him the deposit then found out he never even owned the house to begin with. So things just kind of got worse instead of better," said Wright.

Originally, Wright was excited because her family found their dream home, just in time for Christmas.

"That was what they wanted most of all was freedom and a home where they could actually call it home," she explained.

Wright sent her last dime to a man who claims to live in Pennsylvania and wanted to rent out his house in Elkhart.

But after she wired the money to him, he stopped answering her phone calls.

"I trusted him. I believed in him, that was my salvation. That was my new home." said Wright, "I fell for it, and I hope nobody else in the world does."

ABC 57 spent the day digging and found out that the home is on the market, but the person that is advertising the home on Craigslist is not the real home owner.

We called the number listed on Craigslist several times to confront him, but did not get an answer.

Wright said the hardest part for her, is knowing that she let her kids down.

"They had made a whole new life there and we were all ready for it but it just didn't happen. Now my entire house is packed, my kids are ready to go and we have nowhere to go to. No home, no money, everything's gone."