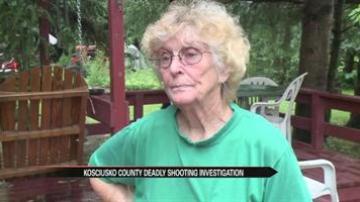 KOSCIUSKO COUNTY, Ind. -- Two bail agents and one recovery agent went to a home Monday night to apprehend a man on a warrant for failure to appear. The incident escalated and the wanted man was killed, his twin brother was shot and a bail agent was shot.

The mother of the wanted man witnessed the shooting.

Ada Helman said the bail and recovery agents spotted her son Gary Helman on her porch. There was some type of engagement between him and the agents and shots were fired.

She said the agents shot through her back door and entered her home.

"I am sick all over, but I have to keep going. I am sick of this mess. I want justice done," said Ada.

The agents allegedly shot and killed 56-year-old Gary Helman and shot his twin brother Larry. He is still hospitalized.

According to police, bail agents Daniel Foster and Tad Martin along with recovery agent Michael Thomas went to the home to apprehend Gary on a warrant.

Martin was also shot and hospitalized.

"I have one son left and a daughter. They have killed my family. They have left my husband to die at the hands of a drunk driver out on State Road 13 back on October 22, 1997 and never did nothing. They sealed the grand jury on that," said Ada.

Ada said she believes Gary first became weary and suspicious of police after finding out his father had been killed by a drunk driver.

Gary's cousin Cristina Vincent says her family is consulting with a lawyer about the incident.

According to Sergeant Chad Hill the Kosciusko County Prosecutor is reviewing this case.