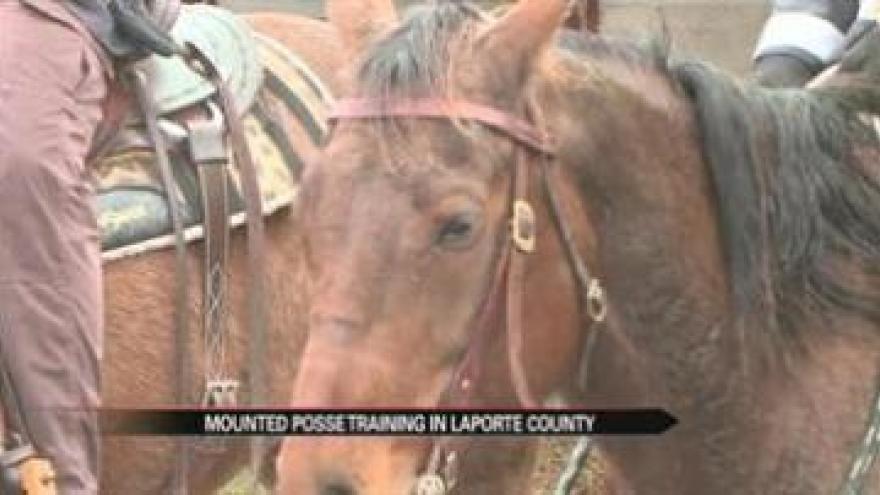 Captain Jerry Rose said training in the pouring rain allowed horses and riders to get used to muddy terrain.

Rose said, “It’s been pouring down rain! And I think the mud and the rain actually added to the training of the horses.”

He says police on horseback can be vital in saving someone’s life.

Rose said, “We can cover a really large area over rough terrain that even ATV's can’t.”

Recently Michiana riders were able to find a missing person in a soy bean field.

Rose said the high visibility on a horse can be a huge advantage.

Rose said, “Around Mount Baldy they had a murder victim they were looking for and we spent the day out there along with Homeland Security, the cadaver dogs, Michigan City Police, and other volunteers.”

Instructor Mark Waller is the director of horsemanship at Culver Military Academy.

On Saturday he coached the group on crowd control.

Waller said, “One police officer on a horse is the equivalent to ten on the ground for controlling a crowd.”

Waller served for almost thirty years as a mounted policeman at Buckingham Palace.

Waller said, “If there’s a crime problem in a certain area, you can actually get these guys to patrol around and people will remember them. They might not remember a squad car driving by.”

On Sunday horses will be trained in tactical skills like stepping over fires and dealing with fireworks.