Move-in day for family that fell victim to housing scam 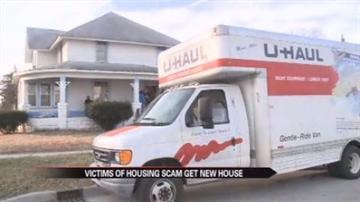 ELKHART, Ind. -- Friday was move-in day for Heather Wright and her four kids. It was a day that they never thought they would see.  After being scammed out of $800, Wright feared her kids would not have a place to call home this Christmas.

After our story aired about the housing scam that Wright fell victim to, there was an outpouring of support from viewers.

Wright said she got an envelope in the mail that forever changed her life.

"I had to immediately sit back down because otherwise I was falling over. In the envelope was a check, no letter, just a memo that said, 'Merry Christmas'," said Wright. "And that's exactly what we'll have because of it."

Someone who saw the story on a Facebook page donated $1,000 to Wright and her kids.

They used the money to pay the deposit for their new home.

"He's our savior and he's our angel.  He will forever be in my heart.  I will always be indebted to him.  He made our Christmas wish come true," expressed Wright.

Wright says she can't even begin to explain the peace of mind that she has knowing that now her kids have a safe place to rest their heads at night.

She said she's learned so much from this experience, and that the generosity of others in her time of need has restored her faith in mankind.

The Wright family is looking forward to making their new house a home.

The person who scammed Wright on Craigslist is stil posting false ads online.  ABC57 has reached out to him, but he hasn't returned our calls.