MSP: Drivers need to slow down on I-94 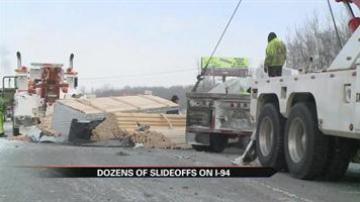 BERRIEN COUNTY, Mich. -- Michigan State Police have been responding to accidents on I-94 all day Tuesday because of the icy road conditions. The Michigan Department of Transportation has been putting sand and dirt on I-94 to improve traction, but it is still dangerous.

During one incident on I-94, a Michigan State Trooper was almost hit.

"This second semi jack knifed behind me, nearly hitting me, and I was just barely able to get out of his way before he crashed," said Michigan State Police Trooper Jeff Miazga. "I had to hurry up and pull out of its way as it was going sideways."

Michigan State Police have been responding to dozens of wrecks and slideoffs on I-94. They say they are very nervous when I-94 is frozen.

"It's crazy out here. It's basically an ice rink that people are trying to drive on. And they clearly don't understand that they need to slow down for these situations," said Miazga.

Troopers want drivers to slow down or to completely avoid I-94.

With these temperatures, the ice will be a big problem for quite awhile.

"We are all shuffling our feet. Trucks and cars are sliding off everywhere, we've are going from one wreck to the next," said Miazga.

Over the last week or so, entire sections of I-94 have been shut down because of the ice.

Miazga says that can sometimes cause more problems by putting semis on slippery secondary roads.

"There's no need to shut it down as long as we can keep a lane open we'll get these loads through but they just need to go slower. They can't go 65 miles per hour," said Miazga.