MSU student speaks out after members of hockey team attacked him 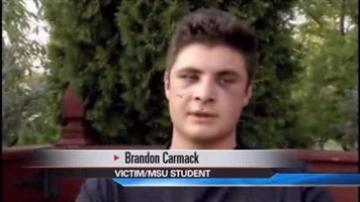 LANSING, Mich. - A Michigan State University student is speaking out after he claims that members of the school's hockey team went after him in a savage attack last weekend.

Brandon Carmack said he went to his girlfriend's house after a night of partying and found the players there.

The couple got into an argument and that's when Carmack claims the players attacked him.

"They tackled me," Carmack said. "And I was on the ground defenseless, in the fetal position while I was getting hit and kicked several times. I got stabbed with something metal in my brain and stabbed with keys."

Carmack was stabbed in the head and arm.

He also has a broken nose and several broken ribs.