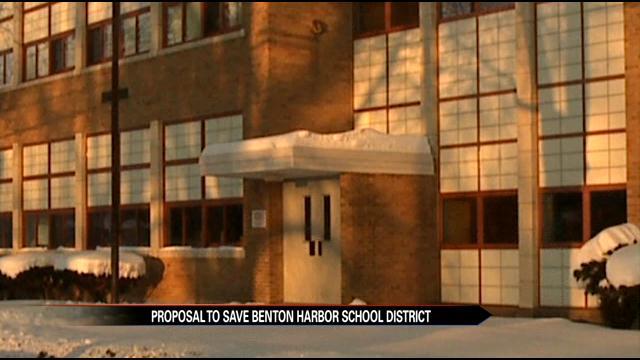 Benton Harbor residents discussed a proposal to put $52 million into the school district at Thursday's Town Hall Meeting at the high school.

Only about thirty people showed up.

Those who were in attendance felt the number should have been greater since the education of the future should not be taken lightly.

“My mission is clear. To preserve the legacy, the dignity and history of this school district that over 140 years old,” said Leonard Seawood, the superintendent for the school district.

He is passionate about the proposal of bringing all Benton Harbor elementary and middle schools into one consolidated building.

“Look around and say, ‘Wow! That's where I want to go,'” said Seawood.

He said that is the reaction Benton Harbor Township students get when they visit other schools' campuses.

“When is the last time we went out on a limb and said our kids are important?” asked Seawood.

It has been fifty years since a school was built in the city.

So, they said the time is now to invest in the future .

“We're not drawing and the new facility could serve as a drawing card to draw students back into the district,” said James Childs, a pastor in the city.

The attendees from Thursday's Town Hall Meeting wanted answers as the microphone was passed off.

“Where my money is going to?” said one attendant.

They want to know exactly what that $52 million would pay for.

While almost all of those in attendance agreed you cannot put a price on education.

“What good is a new building going to do if my child can't read, so that should be a part of the package,” said Newsome.

A consolidated campus would take two to three-hundred dollars out of tax payer's pockets every year.

Voting for the bond will be in the spring.
Share this article: