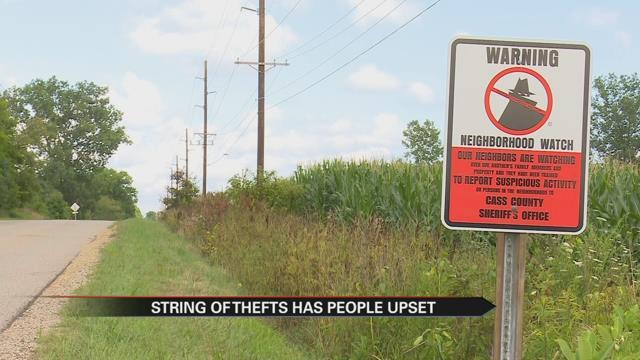 With multiple thefts along one street in Cassopolis, some neighbors say crime is up, and police could do more.

There seems to be a constant string of thefts from houses along Calvin Center Road.

Just this June, Gary had his dune buggy stolen from his friend’s yard.

The friend, Elvis Irving, was selling it for him, and he says the double-locked buggy was taken from right underneath a security light, next to a sign saying he has a security system.

Elvis says thefts around here are on the rise.

“The crime wave through here is just ridiculous…There’s been just rashes of thefts and vandalisms. A neighbor had his van stolen. Another neighbor had a pressure washer and a generator stolen,” said Elvis Irving.

And yet another neighbor has had pieces stolen for the past nine years that he’s lived in his current home, including half of a heavy stack of wooden fence.

“My house was broken into five or six times. My garage has been broken into. But anything that’s left outside overnight is stolen almost immediately,” said Fred Corbid.

Not even a neighborhood watch sign or “Beware of dog” sign or even a “We don’t call 911” sign with a picture of a gun have deterred the thiefs.

Unfortunately, Elvis says many neighbors don’t even report the thefts.

“A lot of the neighbors, they don’t really want to report it to the police, because they figure it doesn’t do too much good,” said Elvis.

Elvis, Fred, and Gary, however, have made sure to report their thefts in the hopes that police will do something about it.

But to them, police could be doing more.

“The police just don’t seem very interested in investigating these too much,” said Gary.

Cass County police say they get thousands of these reports every year, and the thefts come in ebbs and flows, typically increasing in the summer. Still, residents feel police presence is lacking.

“It seems like nothing’s really being done…no response from the police department on the ongoing investigation,” said Elvis.

Police say it’s really hard to track these people down. Elvis says he understands that, but all three agree that a police presence at night could be one way to thwart more thefts or at least catch the criminals.

“I would like to see a presence around this area at night…I would like the people to know that there’s someone driving around at night that could see them doing this,” said Fred.