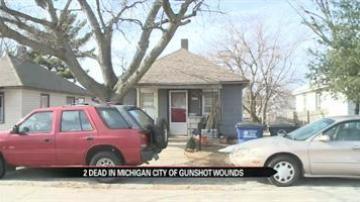 MICHIGAN CITY, Ind. -- A Michigan City man shot and killed his wife, then turned the gun on himself Sunday morning at a home on Cooper Street.

Neighbors were shocked to find out what happened.

“A male subject called La Porte County 9-1-1 regional dispatch center reporting that his wife had just been shot. Dispatch asked who did this and they heard a gunshot and the phone went dead. The gentlemen had taken his life,” said La Porte County Coroner John Sullivan.

Neighbors describe the couple as friendly and kind. They say they never heard or saw any signs of domestic abuse.

La Porte County Coroner John Sullivan says police will be investigating what led up to the incident.

“What they will look for in cases like this are prior calls to 9-1-1,” said Sullivan.