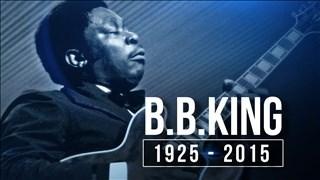 Blues legend B.B. King influenced countless musicians with his virtuoso picking style and full-bodied song delivery. Many of those musicians took to social media to remember the guitarist, his prized instrument and the gift he bestowed on generations of music lovers after his death Thursday night at 89.

Fellow artists shared their favorite quotes from the always wise and often inscrutable King, as well as the best photos of the ax man in action.

Singer-guitarist Lenny Kravitz expressed his reverence for the guitar impresario on Twitter: "BB, anyone could play a thousand notes and never say what you said in one. #RIP #BBKing"

Fellow blues guitarist Kenny Wayne Shepherd said on Facebook, "Farewell BB King. You were like a father to me in many ways over the years. The world is a much better place because you were here. Rest In Peace my friend. The Thrill Is finally Gone. ?#?BBKing? ?#?RIP?"

Roots rocker Jason Isbell tweeted his favorite photo of a young-ish King deep in concentration with his guitar, wearing a shorts suit.

Soul singer Gladys Knight, who had collaborated with King, remembered him as not only an American original but a world-wide influence: "What a brilliant man you were. One who will forever be noted as such an inspiration to millions globally, RIP #BBKing"

Knight shared a video of the two performing "Please Send Me Someone to Love."

Gene Simmons of KISS expressed his sadness over the bluesman's passing.

Scientist Neil DeGrasse Tyson isn't known for his musicianship, but he had a poignant observation about what the loss of King means for humanity: "Curious fact that any time we lose a person who sings the Blues, as we just did in #BBKing, the World becomes a sadder place."