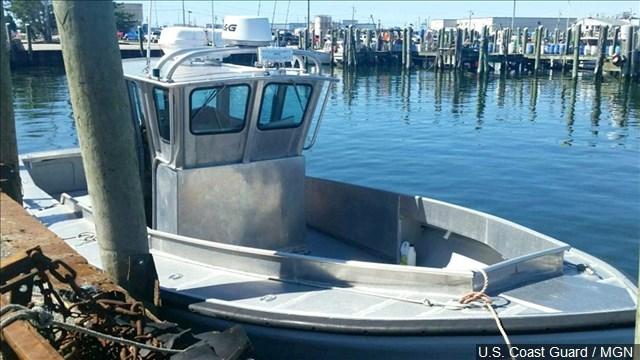 BOSTON (CNN) -- He was rescued alone in a life raft off the New England coast, a week after heading out on a fishing trip with his mother. She remains missing, and the resulting investigation is dredging up questions about an old family mystery involving them both.

Linda Carman, 54, and her son Nathan, 22, were reported missing September 18, a police affidavit shows, a day after embarking on their usual weekend fishing trip. Mother and son left the port of Ram Point Marina, Rhode Island, at approximately 11 p.m. on September 17.

On September 25, Nathan Carman was found adrift in the life raft by a Chinese freighter about 100 nautical miles south of Martha's Vineyard, Massachusetts. Carman contacted the US Coast Guard from the freighter.

"There was a funny noise in the engine compartment. I looked and saw a lot of water," Carman told a Coast Guard Search and Rescue Controller, according to a Coast Guard recording. "I was bringing one of the safety bags forward, the boat dropped out from under my feet. When I saw the life raft I did not see my mom. Have you found her?"

The Coast Guard has since stopped the search.

Nathan Carman was brought to Boston and, following a police debrief, was released and reunited with his family. Detective Gary Marquis of South Kingstown Police told CNN that Carman is not a suspect "yet" in the disappearance of his mother, and police are interviewing friends and family, "making sure all the stories are consistent."

In brief remarks to reporters three days after he was found, Carman thanked the public and the rescue crew and said he felt healthy, though emotionally he had been through "a huge amount."

Police say Carman is being investigated for "reckless endangerment ... resulting in death." Marquis said Carman has not been further questioned by police because "it is not that time yet. We will determine, based on all the facts and circumstances that we glean, whether or not we're going to talk to him again."

CNN made repeated calls to Carman's attorney, Hubert Santos, but has not heard back.

"Issues" with the boat

The South Kingstown Police affidavit indicates "Linda and Nathan had different intentions as to the final destination of the fishing trip."

Linda advised a friend that they were going to fish at "Striper Rock," some 20 miles off Rhode Island, whereas Nathan told local man Mike Iozzi, who was sitting on the deck by his boat prior to Carman's departure, that he was going to the "Canyons," approximately 100 miles offshore.

The affidavit was part of a warrant to search Nathan Carman's Vernon, Vermont, apartment after his rescue.

Iozzi, 71, said he engaged in small talk with Nathan Carman, and noticed Carman removed the trim tabs, devices that help boats sail "with increased safety," according to a Ram Point Marina safety manual.

Iozzi added he did not see any fishing poles in Carman's boat, and when he asked Carman about them he did not receive an answer.

Monty Monterio, 31, a friend of Linda Carman who was living with her in her Middletown, Connecticut, house with his 3-year-old daughter Zoey for the past eight months, said the mother and son usually went fishing in that area. He said Linda's real concern was for the state of the vessel, a 32-foot aluminum-covered fiberglass boat that Nathan bought earlier this year.

"That was the kind of boat he wanted. He wanted a fishing boat," Monterio said. "She wasn't comfortable with the boat yet."

The boat was not new when Nathan Carman bought it, and it had been "on and off" at the Point Judith Marina repair yard in the first part of the year, marina manager Don Vivenzio told CNN.

Vivenzio told police there were "many issues" with Carman's boat, including "issues with a newly installed motor and air getting into the lines," and a problem with the boat's bilge pump, which Carman said he would fix himself. Vivenzio, whose crew conducted some repairs to the boat, said he didn't know whether Carman fixed any of the other issues. Vivenzio said he last saw Carman at the end of July.

Mystery in the family

Nathan Carman and his family are no strangers to police investigations. "This has been the third time, for better or worse, that Nathan has been getting headlines in this area," Linda Carman's criminal attorney, Gerry Klein, told CNN.

Klein first represented Linda Carman when she was arrested in April 2011 for an assault of her then-85-year-old father, John Chakalos. The family members were visiting Nathan, who has Asperger's syndrome -- a high-functioning form of autism -- and was hospitalized in a psychiatric facility in Hartford Mount Sinai at the time, when an argument broke out over the direction of care for Nathan, and financial issues, according to Klein.

The case was never prosecuted and was eventually dismissed, with Linda claiming self-defense. She kept in touch with Klein, often updating him on her son's condition.

"A single mother, one child, and she talked about him nonstop, about how smart he was, about his Asperger's syndrome," Klein recalled.

Carman contacted Klein again a few months later when Nathan disappeared and later showed up in Virginia, distressed after his horse had died.

But it was the mysterious December 20, 2013, killing of Chakalos in his Windsor, Connecticut, home that had perplexed Klein and authorities. Chakalos was a wealthy real estate developer, and court inventory indicates his personal estate exceeded $42 million, with Linda Carman listed as one of the beneficiaries alongside her three sisters.

According to his obituary, Chakalos' wife, Rita, had died of cancer only a month earlier, on November 21, 2013.

"Detectives, after that type of homicide -- with no forced entry, nothing stolen -- and they have at that time a two-and-a-half-year-old police report (of Linda Carman's arrest), they're going to vigorously question her, which they did," Klein said.

Linda Carman passed a Windsor police polygraph test, according to her lawyer. He said Nathan Carman was a suspect but a search warrant in his then-Middletown home produced firearm rifles that did not match the caliber of the weapon that killed his grandfather.

According to Klein, grandfather and grandson were very close, and Linda Carman insisted that her son was not capable of any violence, especially taking a life of someone he loved. Klein also noted Linda Carman told him Nathan was with her fishing at the time the grandfather was killed, contrary to what he had read in media reports saying Nathan never showed up.

However, "this recent boating mishap is probably going to resuscitate the interest in the 2013 killing of the grandfather," Klein said.

Capt. Tom LePore of the Windsor police said Chakalos' killing is part of an ongoing and active investigation.

Mark Dupuis, the Connecticut Chief State's Attorney communications officer, confirmed his office's Cold Case Unit is jointly working on the case with the Windsor police department and the Hartford state's attorney office. Dupuis would not comment whether there is currently a collaborative effort with the investigation into the disappearance of Linda Carman.