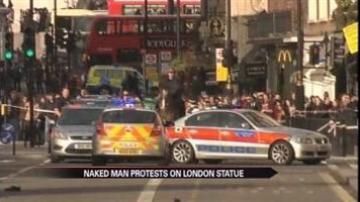 In London Friday, a naked man clambered to the top of a large statue in the heart of the government district. (This video may be inappropriate for young viewers.)

The man sat on the 19th Century Equestrian Statue of the Duke of Cambridge for three hours.

He struck a variety of poses before being coaxed down by police.He once even balanced himself on the massive bronze statue's head.