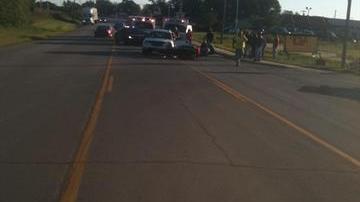 Chief Wray reports that his officers are investigating a crash that happened at 7:55 a.m. near M-62 and Gateway Dr. on Thursday morning.

58-year-old Lewis Maxfield of Nappanee was riding his motorcycle with his wife, 64-year-old Andrea Maxfield. They were going north on M-62. At the same time, 87-year-old Barbara Cook of Cassopolis was driving her car. She attempted to turn left onto Gateway, but turned in front of the motorcycle.

Police were assisted by Edwardsburg Area Ambulance. EMTs rushed Mr. and Mrs. Maxfield to a South Bend hospital to be treated for their injuries.

Police also say that citations were issued, but alcohol was not a contributing factor.