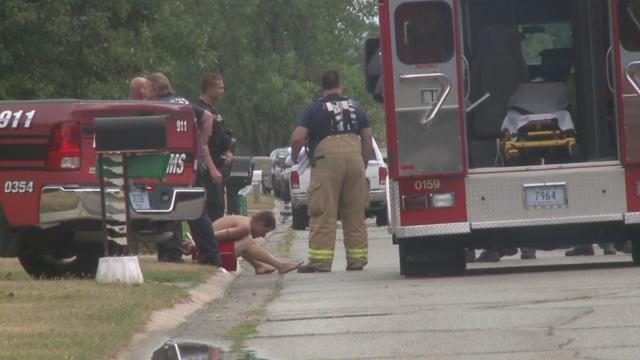 A standoff on Jackson Street in Nappanee lasted for several hours, and involved the Elkhart Bomb Unit and S.W.A.T Team.

Neighbors say they are not entirely surprised that the man, identified by police as Stewart Hummel, was in trouble with law enforcement, but they were shocked that this happened in Nappanee.

William Grubbs lives a few doors down from where the standoff occurred, and said he has seen police there before.

Nappanee Police Chief Steve Rulli says this all happened when they received a call this morning, that young children were playing in the middle of the road by themselves.

When police arrived to find a responsible adult, the father took off running to nearby bean fields.  This made police suspicious, and they soon learned that he had several outstanding warrants in Marshall and Stark counties for drug related charges.

They searched for him for several hours, when a Department of Child Services worker noticed him in the back bedroom of the home.  Police evacuated everyone from inside, and set up a perimeter. Several attempts were made to get the man to leave the home, but he refused.

Eventually, gas was used to remove the man from the home.

Chief Rulli says on top of the outstanding warrants, he will most likely be charged with several counts of resisting law enforcement and neglect of dependents.