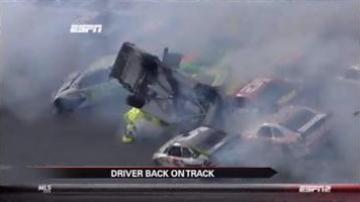 NASCAR star Dale Earnhardt, Jr. will be back on the track at Martinsville.

Earnhardt "red-flagged" himself for two races after he suffered a concussion at Talladega Superspeedway. He was part of the 25 car crash on the last lap of that race.

Junior says he is excited to get back to racing.

"I feel like I've been out of the car for a year," Earnhardt said. "It doesn't feel like a couple of weeks."

Earnhardt now admits to also having concussions earlier in his career and driving anyways. He said he will take them more seriously.