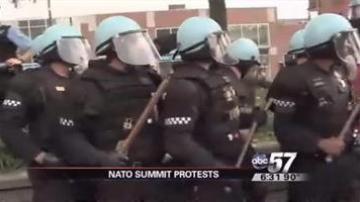 Police used force, their shields and their sheer numbers to corral a group of activists in Chicago, Sunday Night.

It started peacefully Sunday afternoon in Grant Park, where protesters from all walks of life gathered to object to the 2012 NATO Summit.

Later in the day, those protesters marched toward McCormick Place, the location of the summit.

There the crowd gathered to hear stories from war victims and to listen to veterans who surrendered their service medals.

Once the speeches were finished the chaos began.  Permits for the group to gather had expired and the police used a line to force the protestors out of the area over a period of about an hour.

ABC 57 talked to two men who claimed they were struck by police clubs.   Aerial images also showed a police officer who was being tended to by his fellow officers.

At this point there is no complete injury tally.   The summit continues on Monday.