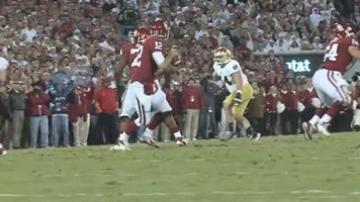 NOTRE DAME, Ind.-- Last year, the Irish returned from Norman, Oklahoma with a 30-13 win over the Sooners, and that win helped convince fans that the Irish team could be serious contenders for the national championship.

But this year things may be more difficult. The Sooners are faster and more balanced, and in order to win, the Irish defense will need to extinguish Oklahoma's run game quickly and early.

"If we go out there and stop the run, I feel like we'll have a great advantage in winning the game," Irish cornerback Bennett Jackson said.

Oklahoma has rushed for a total of 815 yards in just three games. The Irish say the key to stopping the Sooner running game lies in executing those fundamentals.

"As a unit and as a defense we have to be great tacklers. They're a good blocking team obviously, and have great running backs, so we have to be able to stop the run for their gaps and just be assignment sound on every play," Irish safety Mathias Farley said.

This will be Oklahoma quarterback Blake Bell's first career road start at Notre Dame Stadium, and although he doesn't have a ton of experience, the Irish defense sees him as a dual threat.

"He's a real big, physical guy. He can run, he can throw. He ignites the offense. Guys have a lot of faith in him. He's a very complete quarterback and there's no doubt in my mind he'll come in here and play a great game, so we've got to be on our business," Farley said.

Notre Dame's defense has allowed 105 yards on average per game this season and they say they are getting better with each and every time they take the field. This week, they are going to have to play their best game yet.

"We just have to go out and do our thing and go out and do the things that we do. We pride ourselves on stopping the run. I think we do a great job at it. We've continued to progress within each week," Jackson said.

Oklahoma last played at Notre Dame Stadium 14 years ago and was defeated by the Irish. Notre Dame leads the series over the Sooners with nine wins and one loss.