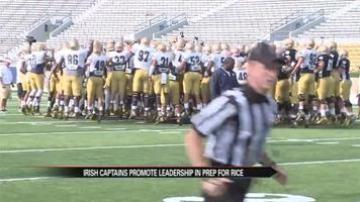 NOTRE DAME, Ind.-- The Fighting Irish team captains have been named and their stage is set at Notre Dame Stadium as they gear up to take on the Rice Owls this Saturday in their home season opener.

“Just having the respect of your teammates and being consistent, being accountable, I like to think of myself as all of those things and I want to portray that each and every day,” Irish running back Cam McDaniel said.

Each captain has his own style.

“Vocally when appropriate, with example when appropriate, basically whatever I feel is appropriate at the time I do. I try not to step outside of my zone, I just am me and I hope people respond well to it,” Irish safety Austin Collinsworth said.

There's one thing they have in common - leadership.

“Even if you’re young, leadership starts before you ever get to Notre Dame, that’s why you’re here for one,” McDaniel said. “Leadership starts as a freshman so when you have the opportunities to lead and take ownership, then do that.”

This year is the first time since 1954 for the Irish to have two team captains from the same hometown. This year's pair is Nick Martin and Sheldon Day, both from Indianapolis.