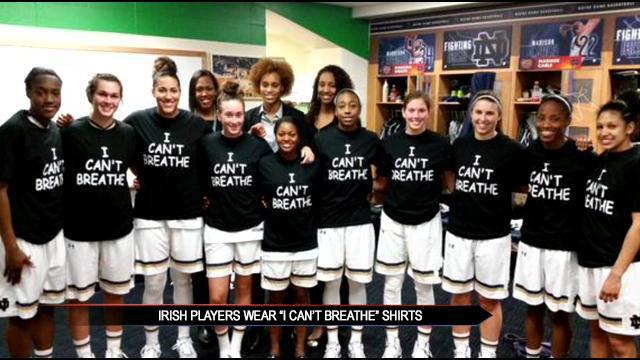 The Notre Dame women's basketball team made a big statement when they took to the court for warm-ups before Saturday's game against Michigan, all without saying a word.

The team wore the "I can't breathe" shirts that many basketball players have been seen wearing recently, all to show support for Eric Garner's family.

While the Fighting Irish won on the hardwood, defeating the Wolverines 70-50, Coach Muffet McGraw says her players proved to be winners before the game even tipped off.

"I think Notre Dame is a place that has always fought for social justice. In my office I have a picture of Father Hesburgh with Martin Luther King, arm-in-arm, in the fight for civil rights. I was really proud of our team stepping up and being willing to publicly stand for something you believe in," said McGraw.

The phrase "I can't breathe" was the last thing unarmed New York resident Eric Garner said before he died of asphyxiation during an altercation with an NYPD police officer.