Neighbor shoots back at thieves 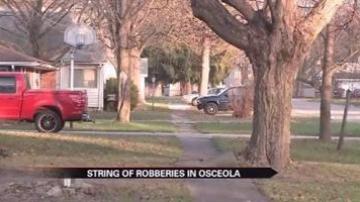 OSCEOLA, Ind. --  An Osceola man is being called a hero after he was shot at by a couple of thieves and decided to take matters into his own hands.

The heroic neighbor did not want to go on camera for fear of retaliation, but he did comment on what happened.

He confronted the thieves and they shot at him and tried to run him over with their car, but instead of running scared, the neighbor pulled out his own firearm and returned fire.

“My truck got broken into and my computer from work got stolen out of it,” said neighbor Bart Norville.

Norville said there have been a series of break-ins in the neighborhood the last month, but so far the thieves have gotten away with the loot.

According to the neighbor, the thieves were stealing items from vehicles and garages, then the thieves would stash the items in the woods and come back for them later,” said Norville.

But when they came back, they were caught redhanded.

“My neighbor almost got ran over and shot and he returned fire and the vehicle raced away somewhere,” said Norville.

Norville said it makes him nervous to think these thieves are shooting off bullets in his neighborhood.

“It is scary to think about my daughter and my wife being here alone without me here,” said Norville.

He said although he is glad his neighbor was not hurt, he is proud of him for stand up to the armed robbers.

Police are currently looking for a blue green cavalier that the suspects were driving during the shooting.