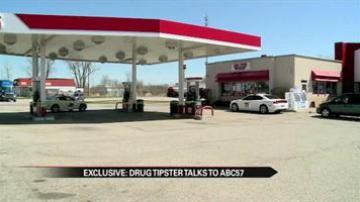 SOUTH BEND, Ind. -- The owner of a gas station on US31 in Lapaz was arrested after police and the drug task force raided his gas station around noon on Wednesday. Officials said they found synthetic marijuana.

Marshall County's Drug Task Force and undercover officers were posted at the gas station all day, after it was accused of selling more than just gas and snacks.

"It was about a month ago that we heard some spice was coming out of there and that it was easily bought in the gas station," says Linda Clevenger, the founder of Northern Indiana Meth Watch.

Spice is a street name for synthetic marijuana.

Clevenger heard the community's concerns and tipped off police herself, since the group Meth Watch prides itself in getting drugs off the streets of these small Michiana towns.

But it wasn't meth on Wednesday.

"We're concentrating on other drugs also, like heroin, marijuana, synthetic marijuana, and anything that is illegal," says Clevenger.

Clevenger says a lot of times people are too afraid to go to police, and often go to Meth Watch with tips.

"We send it off to our police officers and let them handle it," says Clevenger.

Wednesday's raid ended in one arrest.

"It's really kind of like an adrenaline rush because maybe your children, and grandchildren, and others will be safe," says Clevenger.