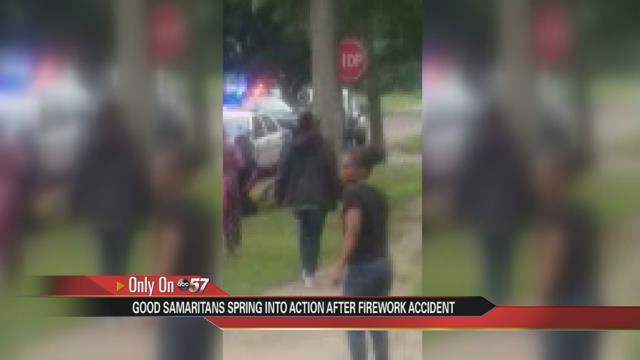 On Tuesday afternoon two young boys in Benton Harbor were injured while playing with a homemade explosive. A 14-year-old boy lost his hand while a 12-year-old suffered minor injuries.

A group of witnesses sprang to action. Their quick action prevented an already horrible situation from turning deadly.

“I think anyone would have jumped into action if they seen stuff like that,” says Mark Brown.

The incident happened near the intersection at Pavone Street and Harrison Avenue.

“All a sudden we heard a big boom. I guess he was coming from this way and we look around and his hand was smoking – it like blew his whole hand off. I think they found a piece there and a piece way back there,” says Brown.

In a split second the men cared for the two boys who were injured.

“He took his belt off and wrapped it around. It got to point where he couldn’t take it, so my other friend Smoke took over and grabbed the belt and kept it tight,” says Brown.

Brown called 911 and shared cell phone footage he took of police and EMTs on the scene. The 14-year-old has a belt around his arm while paramedics escort him to the ambulance and family members follow him.

“But he never cried once – if that was me I would have been crying like a baby,” says Brown.

“I’ve never seen them the guys before in my life,” says Brown.

Police are investigating where and how the boys got a hold of such an intense explosive. As of Wednesday neighbors says the 14 year old is being treated at a hospital in Kalamazoo.