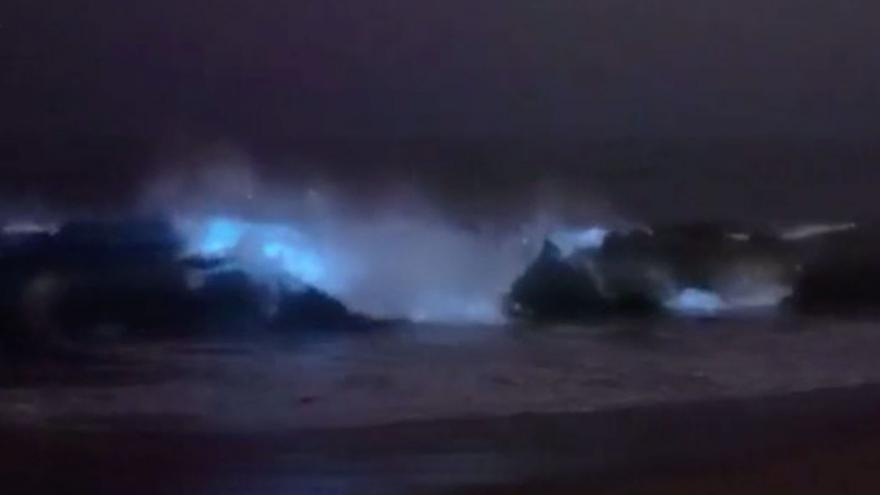 (CNN) -- Imagine standing on a beach at night when suddenly the waves turn electric blue.

Girardeau said Hutain is a nature and weather enthusiasts and was the reason they even knew to look for the rare blue waves.

Hutain told CNN that he was on the beach, which is still open to the public, earlier in the day when he saw a red tide. He decided to send up a drone to see how big the bloom was.

Some algae or animals that cause red tides, such as planktonic surface dwellers, use bioluminescence that can be triggered by a physical disturbance, such as waves, according to the Smithsonian.

He knew the algae might cause the blue glow, but not all red tides create the phenomena.

"It was hard to tell from the shore," Hutain told CNN. "So, we went back that night hoping to see something, and sure enough we did."

The photographers said they were the only ones on the beach that night.

"It was really awesome," Girardeau told CNN. "When you see it in person, it's really amazing to see, because it's so hard to photograph."

Coyne shot video of their experience, which he posted on Instagram.

"When there was a set of bigger waves, it would light up a lot more," Girardeau said. "As the night went on when we walked down farther down the beach it was brighter."

Girardeau usually photographs marine life, so he said this was very special for him.

"I spend a lot of time in the ocean but never on the beach," he said. "So, it was great to see this."