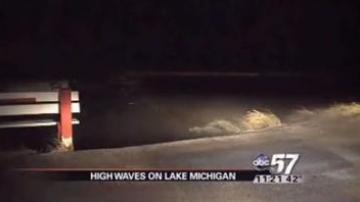 NEW BUFFALO, Mich. -- Despite the heavy rain and large hail throughout New Buffalo, people came from all over Michiana to see the high winds and massive waves along the shore.

Lisa and Matt Bruni traveled from Niles, Michigan, just to see the enormous waves along New Buffalo City Beach. The couple says they have been coming to the New Buffalo beach to watch the breathtaking sunsets for over 25 years.

"This is just what we do, we come up here at least once a month," says Lisa Bruni.

After the pair heard how high the waves were getting along the beach, they had to come see for themselves.

"We came up last night and it was 'so-so' but tonight it was awesome, they were nice waves; the biggest I’ve have ever seen," says Bruni.

As the sun set and the darkness came, it made it hard to see the waves as they crashed into the rocks. However, the high winds and the swirling sand left no doubt that these massive waves were something this beach has never seen before.

"They were big. So big that you could not have’t even comprehend it until you got all the way out there," says Bruni.

New Buffalo beach saw waves reach as high as 30 feet in the air.  Waves across the lake shore, in areas like St. Joseph, give people just a glimpse of what many people saw along Lake Michigan. Its a site Lisa Bruni says, "It's nice having something like that in your backyard and to see something like that just makes it worth while."