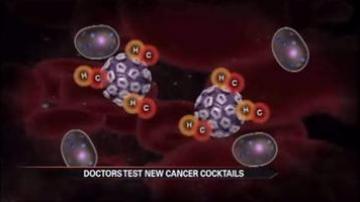 There is some encouraging news for cancer patients

The new series of experimental drugs that is capable of killing cancerous cells while leaving healthy ones unharmed.

The treatment acts like a heat seeking missile with a toxic payload. When it finds a cancer cell it sets off a massive toxic dose that kills off the cancer without damaging the rest of the body.

During a study 1,000, women were given one of the two new cocktails in a clinical trial half were able to get their cancers under control.

About 30 percent of the patients who received anti-PD1, which targeted kidney and lung cancers, saw a decrease in tumor size.

The drugs are being called a dream drug that's already saving lives.

Maureen O' Grady's stage four lung cancer all but disappeared with the treatment.

"It's extended my life. Improved the quality of my life," O'Grady said.

Then there is 28-year-old Bridget Spencer who is now cancer free after a seven year battle against breast cancer.

"Everyday I get up and go to work and dream about celebrating my 30th birthday and one day living in a world that we're free of breast cancer," Spencer said.

These drugs will not be available until next year. But experts say patients should talk to their oncologists to see if they are eligible for clinical trials.