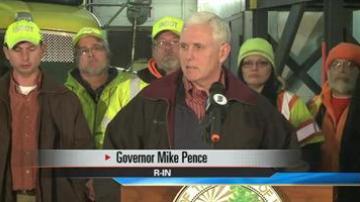 NEW CARLISLE, Ind. -- Governor Mike Pence was in St. Joseph County to detail his plan to tackle potholes Friday afternoon. The governor says crews have been working day and night to repair the roads.

On New Carlisle resident was fed up with potholes in his neighborhood and was frustrated with the Indiana Department of Transportation.

About a month ago, John Gelow contacted ABC57 because of dozens of potholes right outside of his home along US 20 in New Carlisle.

“They were so numerous that there was no way you could dodge them,” Gelow said.

And the potholes weren’t small. We measured.

“They were anywhere from four to six inches deep,” John explained.

Gelow said he’d called INDOT several times but received no call back and no action.

But now he and other drivers along this stretch have a smooth ride.

A day after ABC57's story Gelow said INDOT sent crews out to patch up the potholes.

“They were out the next day and repaired the biggest share of them, and a lot of people in town are very thankful," said Gelow.

He says the state of Indiana has 30,000 lane miles to maintain, so repairing all potholes will take a lot of effort and money.

“The overall cost of this storm to date in terms of clearing the roads and repairing the roads is almost what we spend in an entire year,” the governor said.

But don’t worry, he says the money is already in the existing state budget and won’t cost taxpayers a dime more.

The governor says he needs your help. If you see a pothole let INDOT know. You can send a tweet to @indotpotholes, call 1-866-849-1DOT, or visit their website-- http://www.in.gov/indot/.