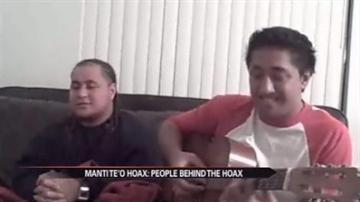 SOUTH BEND, Ind. -- New details have emerged in the Manti Te’o hoax. ESPN spoke with a woman who claims to know the man behind the plot. And cameras have tracked down the real girl whose photo was used for Lennay Kekua.

ESPN sat down with a woman who claims to be friends with Ronaiah Tuiasosopo, the man who is accused of being behind the Te'o girlfriend scam.

The woman did not want to be named or shown on camera.

She did allow ESPN to record her voice and her shocking insight into Tuiasosopo:

"He started to explain himself and say that he has done something terrible and that I tried my best to see what was wrong until he came out and said, ‘You know, do you know the football player called Manti? And I said, ‘Yeah I've heard of him a couple times,’” she said.

The woman claims to have met Tuiasosopo through church.

She says he was frantic and hysterical during the conversation but eventually admitted to the elaborate hoax.

"That he was lying,” she said. “That he and his cousins were behind the whole shenanigans that are going on with Manti. Dating online, lying, calling, emailing, impersonating a girl's voice."

Sports Illustrated’s Pete Thamel released the transcripts from his interviews that he used to write his October first article on Te'o.

In it, Te'o is extremely detailed about his alleged girlfriend's ailments.

But he's vague on the details about their meeting-- claiming they met at a game through a cousin.

But who is the woman that Te'o fell in love with?

ABC'S Inside Edition has learned her name is Diane O’Meara she is a 23 year old who works in marketing in Los Angeles.

He sat down with a salt lake radio station and blasted Tuiasosopo’s integrity.

Alema claims they met this fall at USC and Tuiasosopo lied about running the Troy Polamalu Football Camps, which Alema is actually in charge of.

ESPN is reporting that Te'o's agent says Te'o will not make a public announcement while in Bradenton Florida at the IMG Academy.

However, there is no mention of whether Te'o may leave training to make an announcement.