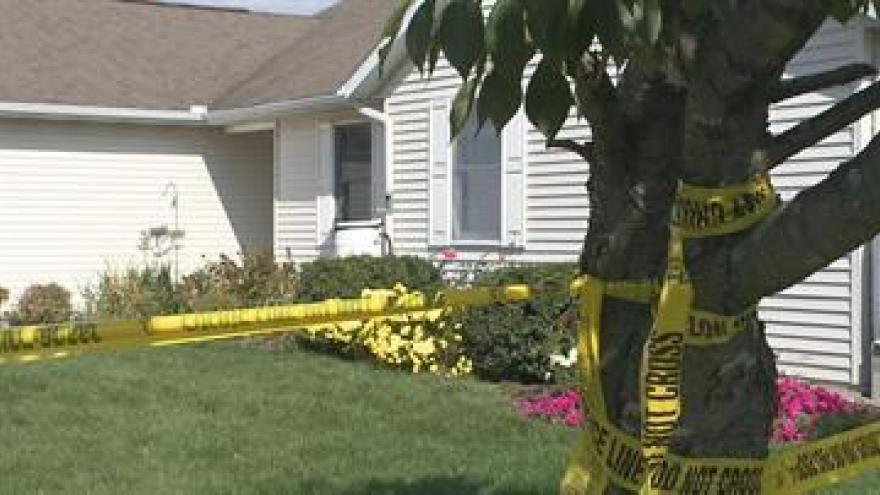 Neighbors first told ABC-57 News Miller had been fatally stabbed on Sunday, after the autopsy coroner John White said the sharp force injuries are in fact consistent with a stabbing.

58-year-old James Miller, a professor at Goshen College was found dead in the street in front of his home, near the family’s mailbox on Wildwood Court.

“It’s been a difficult time for us here,” Omie Baumgartner said. “We have lots of questions, more questions than answers as we begin to put the pieces together.”

Right now, it’s still unclear how the intruder got into the home, why the Miller’s house was targeted, what if anything was taken and where the suspect is?

Since the attack, the quiet cul-de-sac has seen a lot more traffic. Cars circled in and out, people in search of answers, information just some kind of explanation.

“Many things about this situation make me uneasy,” Baumgartner said.

She lives directly across the street from the Miller’s home. From her

front porch Baumgartner could see the paper bags of evidence brought out of the Miller’s house.

Crimes scene technicians have spent nearly 30 hours sorting through the evidence of the brutal attack inside the house.

Yellow tape still surrounded the whole property Monday evening, in the driveway sat a van, a couple bags that were numbered and labeled filled the back of the van all the way up to the ceiling.

There seems to be a lot of evidence, but little information as to what happened inside the Miller’s house.

The Goshen Police Department released a written statement on Monday, it said police are following up on leads and the home invasion / homicide investigation is still on-going.

“It’s hard to know what to do in situations like this one,” Baumgartner said.

In the statement released on Monday, the Goshen Police Department said it will release more information as it comes in, until then people are advised to be aware of their surroundings and lock their doors.

According to the police a white male entered the home and attacked James his wife, Linda Miller. At some point during the attack Linda was able to call 9-1-1.

Neighbors said the family’s dog a small poodle-mix distracted the intruder, and Linda was able to barricade herself in a bathroom and dialed from there to report a robbery in progress.

Officers made a silent run, lights and sirens on the squad cars were turned off as police arrived at the scene. But by that time, some people in the neighborhood had already been alerted that something had happened.

The Miller’s dog, Frisky got outside and continued to bark, after the dog got neighbors’ attention, some could hear James call for help.

When neighbors went outside, James’ body was in the street. Officers pronounced him dead at the scene. Neighbors said they believe James was trying to get help when he collapsed and died.

“Jim’s mother has lost a son, and his family has lost a father, his wife lost her husband… and it just ripples,” Baumgartner said. Miller, a biology professor had three children and one grandchild.

Linda Miller was taken to Elkhart General Hospital with serious injuries. She was later transported to a South Bend hospital where she underwent surgery; neighbors said she is expected to recover.

The couple’s two children, both students at Goshen High School were not at home at the time of the attack. Their daughter, a senior and son, a freshman were on a bus headed back from Indianapolis after a marching band competition this weekend.

The two kids got back into town a little after 3 AM, just two hours after the attack.

On Saturday afternoon, Baumgartner said she was with the Millers at a neighborhood gathering “It was a regular day with children off at a band competition,” Miller said. “…And in a moment it changed.”

Baumgartner said there is no point to try to find reasoning in this situation; she said she is focused Linda and her children. While there are still a lot of unanswered questions, Baumgartner said she knows she and the community will be there to help Linda and the Miller family get through this time.

“While there are many unknowns, we will walk with Linda,” Baumgartner said.