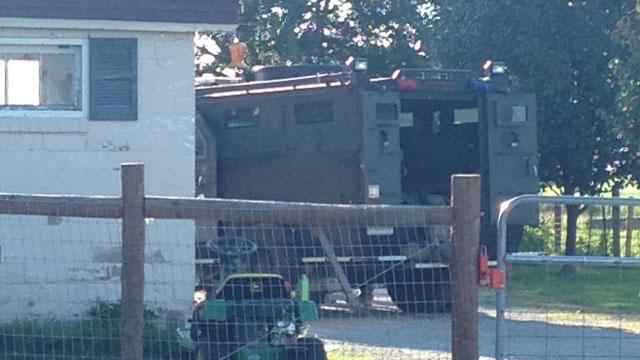 An affidavit for an arrest warrant gives new details in the ATF search at a home on SR 331 Tuesday morning.

Trooper Brian Hoffman with the Indiana State Police wrote the affidavit for federal charges against Shawn Michael Dyad for one count of felon in possession of a firearm and one count of false statements during firearm acquisition.

According to the affidavit, Dyda, a convicted felon, sent his girlfriend to Midwest Gun Exchange in Mishawaka to purchase two weapons for him.

On May 26, 2015, Stephanie Weeks purchased a Smith and Wesson .223-caliber rifle from Midwest Gun Exchange. According to the trooper, she went into the store alone, but left in a white Ford Taurus with a man who had waited outside in the vehicle.

On June 4, 2015, Weeks returned to Midwest Gun Exchange and attempted to purchase a Diamondback 9-mm handgun. She was told she would have to return for the gun.

On June 9, Weeks attempted to pick up the handgun, but was told the purchase was not approved. Her money was returned, according to the affidavit.

The trooper made contact with Weeks on June 17 to speak with her about the firearms purchase.

Weeks told the trooper she was going to report the rifle stolen, but said she knew Dyda had taken the gun from her apartment.

Weeks allegedly stated she does drugs with Dyda regularly and they have known each other for three months and are dating.

An agent with the ATF conducted an interview with Weeks on June 18.

The affidavit says she admitted to the ATF she purchased the rifle for Dyda and that he paid for the gun and gave her $320 for her rent.

She also allegedly admitted to attempting to purchase a second weapon for Dyda.

She told investigators Dyda stores firearms and drugs at her apartment, according to the affidavit.

On July 15, Weeks contacted the trooper and said Dyda had threatened to kill her.

The trooper confirmed with the state of Michigan that Dyda was convicted of possession/manufacturing methamphetamine, aiding and abetting of larceny from a motor vehicle, delivery of marijuana, home invasion in the second degree and delivery/manufacture (narcotic or cocaine).

An ATF special agent confirmed the rifle Weeks purchased, and believed to be in Dyda’s possession, was manufactured outside of Indiana and had traveled in interstate commerce.

Later in the day, on July 21, Dyda’s wife called Trooper Hoffman and said she received a phone call and the anonymous caller said the rifle was in an alley behind a bar named Tapped Out, according to the affidavit.

Officers responded to the scene and located and seized the rifle.