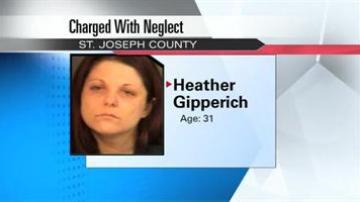 SOUTH BEND, Ind. -- The St. Joseph County Prosecutor's Office was granted an extension to further review the case against 31-year-old Heather Gipperich who is accused of neglect of a dependent and taking a child to a nuisance.

The investigation started on February 15, when Gipperich's mother, Sara Cooper, contacted the South Bend Police Department to report she had not seen her daughter for several days.

Cooper also told police her daughter was addicted to heroin.

Police located Gipperich on February 16 and investigators spoke with her.

She said five days earlier she and a man named Timmy went to a house in St. Joseph County to buy and use heroin, according to court records.

She said she had her child with her at the time.

While at the home she said she allowed a woman named Amanda take possession of her 9-month-old baby. She told police she had just met Amanda that night, according to court records.

Gipperich told police she had been in contact with Amanda every day.

Elkhart Police located Amanda and the child was turned over to the Indiana Department of Child Services.