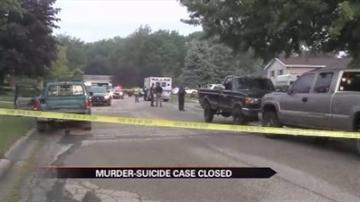 ST. JOSEPH COUNTY, Ind. -- The St. Joseph County Prosecutor's office says it has closed the investigation into the murder-suicide in New Carlisle Indiana. In a press release, the prosecutor's office gave further details of the events that led to the shooting.

According to the prosecutor's office, Andrew Zarobinski arrived to the home on Thunderbird Drive in New Carlisle around 7 a.m. and entered the bedroom where Michelle Zarobiniski was with her 9-year-old daughter.

Andrew ordered the 9-year-old to leave the room. Her sister, 14-years-old, was in the shower at the time.

The girls heard Andrew and Michelle arguing. Andrew pulled out a handgun and shot Michelle twice in the head.

The press release says the girls ran downstairs and Andrew followed. He said something to the children, then went back upstairs.

The girls then heard a single gunshot.

The 14-year-old called dispatch and said her stepfather had shot her mother.

When officers arrived, they found the two girls on the front porch of the home.

Inside the home they found the bodies of Michelle and Andrew.

The coroner conducted autopsies on both Michelle and Andrew. Michelle died from two gunshot wounds to the head. Andrew died from a single gunshot to the head.

The investigation revealed Michelle and Andrew had been separated for some time and had been discussing a divorce. Investigators also learned there were no calls to police from the home.

The prosecutor's office determined the deaths were the result of a murder-suicide and closed the case.

Michelle worked for Wells Fargo for 19 years. First at a branch in New Carlisle and most recently as a Home Mortgage Consultant in Mishawka.

The company released the following statement:

“We are deeply saddened by this tragic news. Our thoughts and prayers are with the family members at this very difficult time. Wells Fargo team members who are in need of assistance should contact Wells Fargo Employee Assistance Services at 1-888-327-0027.”

Ms. Zarobinski had been employed as a Home Mortgage Consultant.