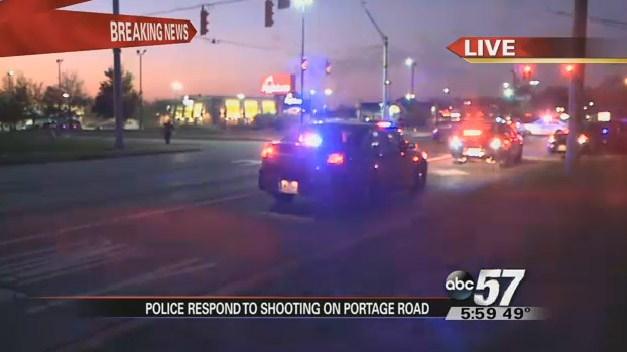 The man who was shot by police after allegedly robbing the Check Into Cash store on Portage Avenue in South Bend on Tuesday was charged on Thursday.

Avery Ray, 26, has been charged with two counts of robbery, one count of unlawful possession of a firearm by a serious violent felon, resisting law enforcement and two counts of pointing a firearm.

Around 5 p.m. Tuesday, South Bend Police responded to a hold-up alarm at Check Into Cash on Portage Avenue.

Two officers who were in the vicinity of the call responded.

Officer Jeremy Siade saw a man, later identified as Avery Ray, running from the area of the business carrying a handgun, reports said.

Officer Siade got out of his vehicle and told the man to stop. Instead, the man ran off.

The officer ran after Ray and directed him to drop his weapon and get onto the ground, reports said.

According to police, a second officer, Officer Sam Chaput, arrived to the scene of the foot chase and the suspect turned towards the officers. Ray allegedly raised his gun in the direction of the officers, police said.

"The man turned to that officer as well and pointed his firearm in defense of himself, fearing for his safety and the safety of the other officers, and the general public, the officer fired his weapon three times at the suspect striking him once in the leg," Lt. Dave Williams of Metro Homicide said.

Officer Chaput then fired three times at Ray, striking him once in the leg.

"They did what we hope all law enforcement officer would do," said Prosecutor Ken Cotter.

Officers say they found the money Ray took from the Check Into Cash in his pockets and also found a .40-caliber handgun and secured it.

Ray was taken to the hospital with a shattered femur, according to court records.

According to the probable cause affidavit, Ray was convicted of robbery while armed with a deadly weapon or resulting in bodily injury and robbery in 2008.

Officers Chaput and Siade are on paid administrative leave until the investigation is complete, which is standard protocol in officer-involved shootings.

"Think about the families of these officers who could have had a very different outcome had there been a millisecond difference." said South Bend Police Chief Scott Ruszkowski.