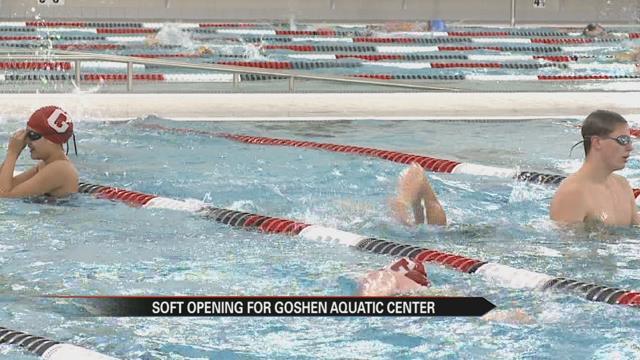 In November of 2013 they voted yes to a $17 million dollar school improvement project.

The biggest improvements to the new aquatics center at Goshen Middle School can be seen and heard.

There is now a 10 lane competition pool and a six lane cool down pool.

Head coach Nathan Long says this is a lot more space than the six lane pool his team was practicing in.

The sound system has been upgraded and the center now has seven speakers.

The $10 million construction project will not only be used by the swim team.

There will also be public swim hours and senior hours for the Greencroft communities.

Aquatics director Laura Rupp says community use of the pool should start in February.

Long says the new pools holds more than double the amount of the old pool.

The stands also fit 470 spectators versus 175 at the old pool.

The project faced multiple delays due to weather. After an original finish date of July 2015, the pool is finally being used of January 19th, 2016.

“It kept getting pushed back and pushed back and it’s been long awaited but it is very nice that we were able to get in yesterday and swim and the kids enjoyed it.  There wasn’t really any verbal reaction it was all smiles and just very excited hooting and hollering,” says Long.

The first swim meet held at the new aquatic center was also the high school team’s last meet of the season. The team hosted New Prairie and East Noble.