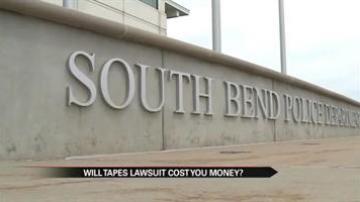 SOUTH BEND, Ind. -- Four police officers are accusing Councilman Henry Davis Junior of damaging their reputations when he wrote a letter to the Department of Justice about allegations the officers were recorded saying inappropriate, racial remarks.

The same four officers received $500,000 from the city in December after a settlement in a separate wiretapping lawsuit.

Now they are suing again, but tax payers might not have to pay this time.

“My clients continue to feel like they are the villains in all this, when they are truly the victims. They did nothing wrong,” said the officers’ attorney Dan Pfeifer.

They believe they did nothing wrong and now think Councilman Henry Davis Junior should pay up.

“I guess they just want to make sure no one talks about it. I guess this is an intimidation tool,” Davis said.

When asked why we just can’t play the tapes and figure out what was said, the attorney explained that it doesn't matter what was said on the tapes. He said all that matters is that they were taped illegally.

“Conversations they had were illegally recorded. That makes them the victim. The content of the tape and the recording is not relevant at all,” said Pfeifer.

So the lawsuit stands and Henry Davis Junior could be forced to pay up, but as for how much we don’t know.

Pfeifer said in the state of Indiana you cannot ask for a specific amount of money when filing a complaint.

But ABC57 still wanted to know if the officers win this case who will pay, the city or Councilman Davis.

“The bottom line is if he's acting in the course of his responsibilities ultimately it's the city of South Bend that could be responsible,” Pfeifer said.

The city meaning you, the taxpayers.

Pfeifer would have to prove that it was Henry Davis Junior acting for the city in a court of law before taxpayer money would be spent.

If that's not proven than Henry Davis Junior would pay the money himself.
Share this article: