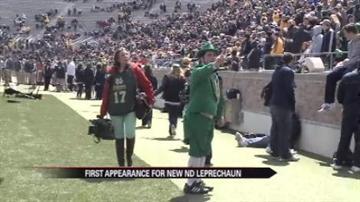 SOUTH BEND — Saturday was the first time playing in Notre Dame stadium for a few new Irish players, but others were making their stadium debuts as well. Johnny Romano made his first appearance as the new Notre Dame leprechaun.

Romano has been working with the hockey team and served as an apprentice to leprechaun Bryce.

Now he'll be the one leading the cheers for Notre Dame.

"We're so excited that he finally got to the leprechaun," said Christina Romano, Romano's cousin. "He's excited as well and I think the entire stadium is going to go nuts when they see him on the field."