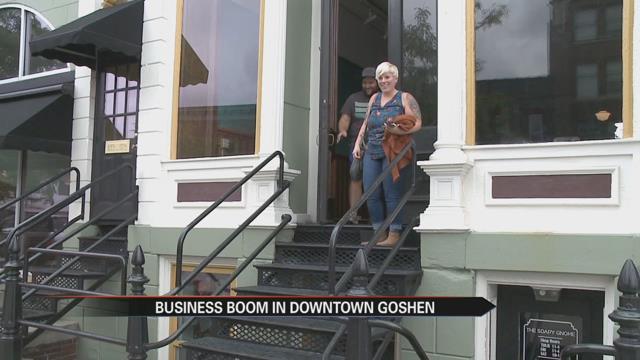 A business boom in downtown Goshen has nearly every storefront filled and two first time business owners will soon open a bar off Lincoln Avenue.

They will serve exclusive drinks in addition to classic cocktails. Officials say new, niche shops are giving customers something they can’t find anywhere else.

It’s lunchtime in Goshen and the sounds of people chattering and dishes clanking fill the sidewalks in anticipation for one dish.

“We are here to just do certified Neapolitan pizza,” says Logan Miller, Manager at Venturi.

Miller says the small restaurant can see up to 150 people on a week night.

“Sure some people are disappointed when we don’t have lasagna or pasta or something like that. But ultimately people come here because they want Neapolitan pizza,” says Miller.

“I wanted to go deeper into the world of craft cocktails and so we decided to just do it ourselves,” says Jami Hawkins, co-owner of Common Spirits.

Jami and her husband Ryan previewed their business, Common Spirits, at a special event which attracted people near and far.

“It would be very difficult to sustain the stores we have downtown if it weren’t for people coming from all over Michiana Fort Wayne even the Chicago and Indianapolis area,” says Daugherty.

The chamber does not have any one lined up for the empty spaces. The Hawkins hope to open the doors to Common Spirits by December.