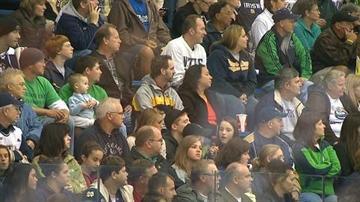 NOTRE DAME – Preseason hockey action took the Joyce Center by storm Sunday night, for one of the last times. With just a few games to go until the new Compton Family Ice Arena, players and fans are taking in the tradition while they can.

Sunday, the Fighting Irish shut out Western Ontario 4-0 in regulation. During the game, fans sporting jersey’s, hats, sweaters, and jackets supporting the team streamed in and out of the stands.

Some of them talked about the excitement surrounding the move to the new arena in just three weeks. It had been announced Rensselaer will be the first opponents Notre Dame will face in their new home, on Oct. 21.

For some fans, the move to a new arena will be bittersweet. “You lose a little bit of the history here, but it will be nice to [get] a little bit more modern, nicer stadium for [the team],” said Christine Claussen, a longtime Notre Dame fan.

Other fans are full of anticipation. “We’ve been watching the building of the arena and we’re just really excited to see the inside and we can’t wait,” said Dusty Rucano, a season ticket holder.

The impact of a transition to a new building and the history that will be left behind is not lost on the players. “It was really cool to stay here at the Joyce for a year-and-a-half, year-and-two-games, you know bask in the tradition that is here and what the program has built. Now moving over we can start a new tradition,” said Anders Lee, a sophomore center on Notre Dame’s roster.

Meanwhile, T.J. Tynan, last year’s rookie of the year, reflected on what the new arena will bring the Irish. “It’s unbelievable, I feel very fortunate. I mean obviously it’s state of the art, it’s going to be one of the best buildings in the country and we’re all really excited to get over there as soon as possible,” said Tynan.

The new arena will hold roughly 5,000 fans, which is nearly 2,000 more than a sell-out crowd at the Joyce Center. It is also letting more fans get season tickets right at ice level where the action is fast and at times fierce.

But everyone will have to wait until Oct. 21 and Rensselaer to get their first taste of a new era in Notre Dame Hockey. Until then, the two final games played at the Joyce Center will be against Ohio State in two weeks.