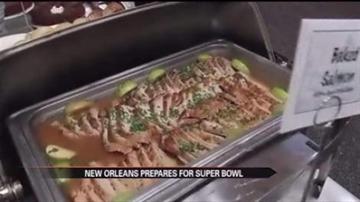 NEW ORLEANS -- More than 72,000 people will pack this year's Superbowl in New Orleans and that mean's crews will have a tough time getting ready. But It is not just the stadium crew but folks around the city as well.

Businesses are putting the finishing touches on painting and repair projects in the French Quarter.

The city has even spruced up Bourbon Street by installing four new, 1920's style street lights.

Fan's are pretty excited for the big game.

"For many of us, this is the most major event we will do in a lot of our careers," said New Orleans resident.

Many fans are most excited about the french food on Bourbon Street.

Arise Tour at the Lerner cancelled, won't be rescheduled