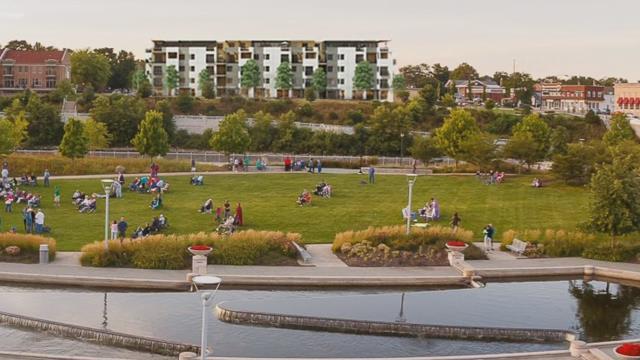 Wednesday was the grand opening for the River Rock Apartments along the riverfront in downtown Mishawaka.

Leaders and residents say it’s just the beginning of a makeover for the Princess City.

Blair Powell, a new resident, grew up in Mishawaka and attended grade school just steps from where the River Rock Apartments went up.

“People are finally realizing they want to stay here and make this place grow, instead of leaving for a bigger city. There is potential in Mishawaka and South Bend,” said Powell.

“It changes the dynamics of our downtown. It changes our skyline and our vibrancy, especially on the north side,” said Wood.

Wood said a change was needed, and now that it’s happening, more is on the way.

“You’ll continue to see growth here in Mishawaka, in residential and retail and we’re seeing new restaurants coming in and this sets the tone for all of that,” said Wood.

River Rock Owner, Scott Sivan, collaborated with the city and said the end product is very close to what they originally had planned.

"The city's vision and our vision were in sync. All the different demographic trends are in this building downtown,” said Sivan.

For Powell and his fiancée, the future of Mishawaka and the riverfront, is a happy one.

“It’s exciting to be a part of this and we were living here first and see two, three years from now, what else is built around us,” said Powell.

The Mayor is also happy about where his city is headed.

“You are going to see that here and downtown over the next year or two, so stay tuned,” said Wood.