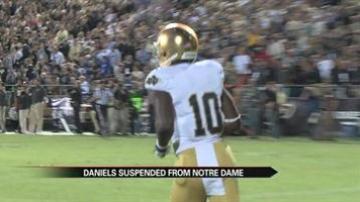 NOTRE DAME, Ind. -- It's not even halfway through January, and the new year's already presenting some big changes for Notre Dame athletics.

Notre Dame's Football team will be spending the spring semester without their most productive returning wide receiver, DaVaris Daniels.

ND Football's Media Relations Director Michael Bertsch says the 6'1'' Sophomore is being suspended for the upcoming semester due to an academic issue.

If this situation sounds familiar, that's because it is.

Daniels is now the 3rd high-profile Fighting Irish athlete to be penalized in the past year.

Jerian Grant, senior scoring leader for the Notre Dame Men's Basketball team, was suspended not even a month ago for an academic issue. Notre Dame QB Everett Golson sat out during the fall semester under very similar circumstances as well.

With 49 receptions going for 745 yards and 7 touchdowns during the 2013 Fighting Irish football season, Daniels proved to be an important cog in the Irish offense.

Before the suspension, the redshirt sophomore was strongly considered the team's best solution to fill the void left behind by graduating senior T.J. Jones.

On a more positive note, the Notre Dame athletic department is preparing for a new look.

Since 1997, Irish athletes have always donned Adidas apparel, but according to ESPN, next season they'll be sporting something different: Under Armour.

Under Armour founder and CEO Kevin Plank flew to South Bend Thursday to sign a deal with school officials.

Notre Dame will be coming out of a 10-year contract with Adidas that began in 2005.

The Irish are joining the likes of Auburn, South Carolina and Northwestern to name a few of the schools already signed with Under Armour.