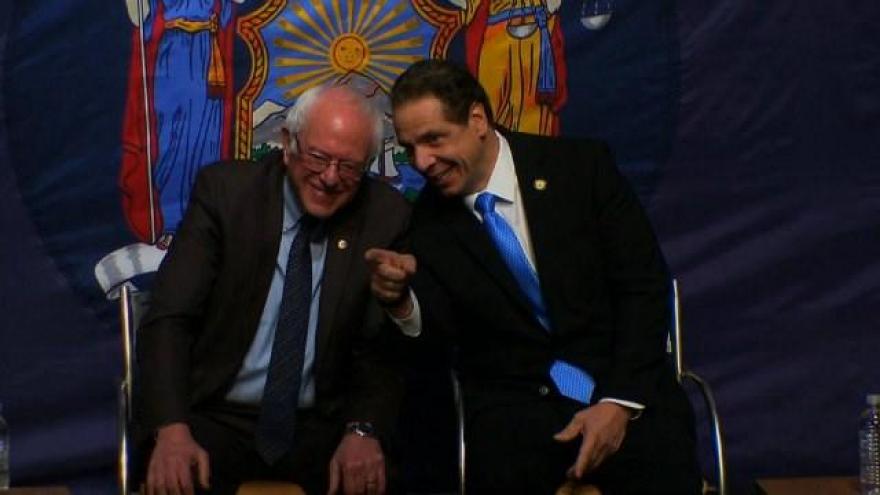 Students whose families earn $125,000 or less would pay nothing for tuition at two- and four-year public colleges under the governor's plan.

It's similar to what Hillary Clinton proposed for public colleges across the country during her presidential campaign.

Cuomo announced his proposal in Queens on Tuesday, alongside Senator Bernie Sanders who first advocated for free tuition during the 2016 presidential campaign.

"In this economy, you need a college education if you're going to compete," Cuomo said in front of a crowd at LaGuardia Community College.

"It's incredibly hard and getting harder to get a college education today. It's incredibly expensive and debt is so high it's like starting a race with an anchor tied to your leg," he said.

Tuition at New York's state-operated colleges, which includes 64 SUNY campuses, is $6,470 at four-year schools and $4,350 at community colleges for the 2016-2017 school year. The City University of New York's 18 campuses have similar tuition costs and would also be included under Cuomo's plan. (Students would still be on the hook for additional fees, as well as room and board costs.)

About 59% of students at New York's four-year colleges graduate with debt, according to The Institute for College Access and Success. On average, they are carrying $29,320 of debt.

But first, the New York State Legislature would need to vote on the program, and its prospects are uncertain.

"Governor Cuomo isn't providing 'free' tuition, he's simply telling New York taxpayers to write a bigger check," said New York State Assembly Republican Leader Brian Kolb, in a statement emailed to CNN. "At the end of the day someone has to pay the bill, and once again his political ambitions will be subsidized by the highest-taxed people in America."

Based on enrollment projections, the plan will cost approximately $163 million annually once fully phased in, according to a statement from the governor's office. It estimates that 940,000 New York households have college-aged children who would be eligible for the program.

The state would not be covering the entire tuition bill for each student because many already receive some kind of financial aid. New York spends about $10 billion a year on higher education.

"I urge New York legislators to pass this enormously important proposal, and become a model for the rest of the nation," said Sanders.

If Cuomo succeeds, New York could be the first state to make tuition free at all public colleges and universities. Though other states, like Tennessee, have made community colleges tuition-free after President Obama made a push for a similar nationwide program in 2015.