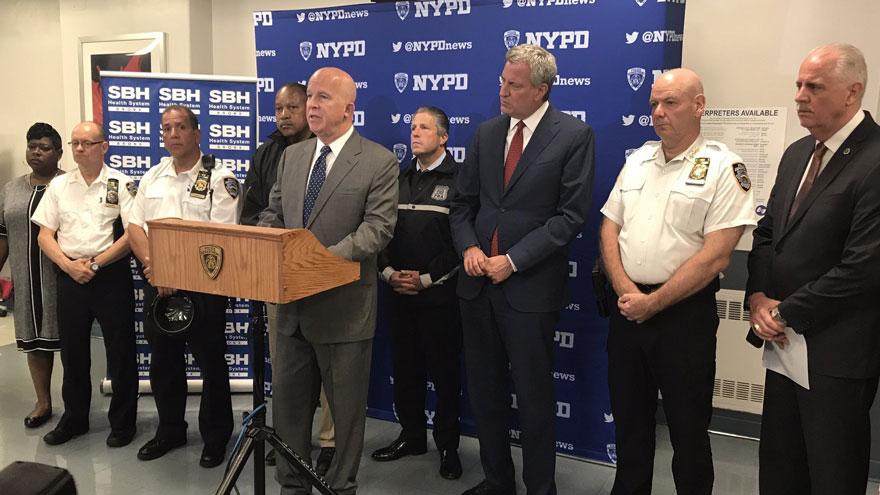 NEW YORK (CNN) -- A New York police officer of 12 years and mother of three was fatally shot early Wednesday as she sat in a command vehicle in the Bronx, authorities said.

Miosotis Familia, 48, was shot in the head shortly after midnight while she and her partner were sitting in a marked police vehicle. She was taken to St. Barnabas Hospital, where she died, the New York Police Department said.

Familia was "assassinated in an unprovoked attack on cops" when a suspect shot through the window of the officer's vehicle, said James O'Neill, the New York police commissioner.

Police encountered a male suspect, identified as Alexander Bonds, 34, running about one block from the scene. The suspect allegedly drew a revolver as officers confronted him, and he was shot and killed by police, O'Neill said.

A silver revolver was recovered at the scene, police said.

Dispatch audio of the moments after Familia was shot reveal her partner frantically calling for help.

Police said Familia worked in the 46th Precinct, which tweeted out a photo of the officer.

An apparent bystander also was struck by a bullet during the encounter, police said. The person, who was not identified, is in stable condition at a hospital.

The suspect, also known as John Bonds, was arrested in Syracuse in July 2005 for robbery in the first degree, according to the Onondaga County, New York, district attorney.

Bonds received an eight-year sentence, with five years of post-release supervision, and was transferred to Elmira state prison in 2006, according to a statement from the district attorney.

He also had a criminal record for sale of a controlled substance in New York state, according to Thomas Mailey, spokesman for the York Department of Corrections and Community Supervision.

"Fully knowing the dangers that she faced, she suited up in uniform everyday and stood tall against those who threaten and terrorize the good folks of the Bronx," the union said in a statement.

New York Mayor Bill de Blasio praised Familia and the actions of officers who responded to the shooting.

"She was on duty, serving this city, protecting people, doing what she believed in and doing the job she loved," de Blasio told reporters. "After this sudden and shocking attack, her fellow officers came to her aid immediately."

US Sen. Chuck Schumer called the shooting "terrible news," and Gov. Andrew Cuomo said that all New Yorkers "share in the pain and heartbreak caused by her death."